Lawn care, whether it is done at work or at home, is a task that causes many injuries every single year. According to the US Consumer Product Safety Commission, more than 60,000 injuries are treated in hospital emergency rooms each year because of unsafe operation of power lawn mowers. A separate study by the Center for Injury Sciences stated that an estimated 81,907 injuries involving a lawn trimmer, more commonly referred to as a weed wacker or weed eater, occurred from 2000-2009. These were just the injuries that were reported. Many more were treated in the home and not reported. 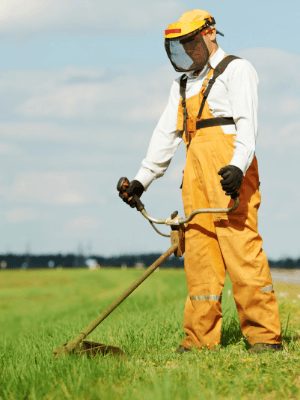 A weed wacker is designed to rotate a blade or string at high speeds, which not only cuts the desired brush or grass but also often can throw stones and other objects at high rates of speed. These thrown objects can cause property damage incidents or injuries to bystanders. Evaluate your work area and task and take into account the possibility of these types of incidents occurring due to thrown objects.

Do not take lawn care activities lightly when it comes to safety. Injuries occur every single day while using this equipment. As mentioned above, most reported injuries occur to the eyes. How would an injury to the eyes affect you and your ability to work?