The Ripple Effect of Safety

Speaker note: Some of this talk is written in the first-person point of view.

When discussing injuries and the importance of working safely, we often discuss how an injury would affect an individual’s immediate family or loved ones. While this may be an effective method to provoke thought in an individual worker, the not-so-immediate effects of working unsafely need also to be discussed. There is often a far-reaching ripple effect of consequences from any incident that occurs, even if it does not result in injury.

Below is a personal story of how my perspective shifted regarding how my own actions impacted others.

The ripple effect is a commonly used concept in today’s society. Merriam-Webster defines ripple effect as “a spreading, pervasive, and usually unintentional effect or influence.” In the field of environmental remediation, our projects are spread out across the country. You may never see or work with the other 90% of the company’s workforce. It is easy to fall into a state of mind that what occurs on your particular project mainly affects just those people and that project alone.

One day, while prepping for an audit during the first few months of being employed at the company, I was reminded how far my actions or decisions can actually reach. Our client had very strict standards for safety, which made for a safe job site, but it also put a lot of pressure on the management and the work crew.

Out of frustration, I made a statement half-jokingly along the lines of “the worst thing they can do is fire us.” A woman who has been with the company almost as long as it has been around was quick to respond. She stated, “No, that is not the worst thing that can happen. The worst thing is that we could perform poorly, and our company’s reputation could be damaged.”

A light bulb went off right then. Our decisions, actions, performance, etc., affect more than just ourselves. Sure, in theory, I could have been fired if the audit went terribly (which it went very well), but that is not the worst thing that could come of my decisions.

The worst outcome is affecting the company on a larger scale in a negative fashion. These audits were a part of our scorecard that was in part used to bid other jobs with this client. If we did not perform well at my site, we hurt more than just ourselves on that site. We hurt the company.

Why You Should Focus on the Large Ripple

This idea of a larger ripple is something I try to pass on to the other employees on my sites. Even if they do not enjoy working for the company as much as I do, they should have some type of feeling of obligation to complete their best work for the other employees in the company. If someone is planning on quitting and decides they do not care anymore or are willing to take risks, they need to understand that there are hundreds of other employees and their families depending on the paycheck that comes from the company. One simple action or decision that leads to a negative event can have far-reaching long-term consequences.

It is easy to think the owner or high level of management who represents “the company” does not care about the individual worker, thus making it easier to rationalize taking shortcuts or putting in little effort at work. In my opinion, it is more difficult to brush off the idea that an individual’s lack of effort or unsafe work behavior is hurting their fellow employees in the company.

What kind of ripple effect will you make? Is it pervasive in a good way? Let your work have a larger positive effect on your company. Challenge those around you to have a positive effect that reaches far past the immediate jobsite, office, or branch they work in.

Check out our safety poster related to this safety talk! 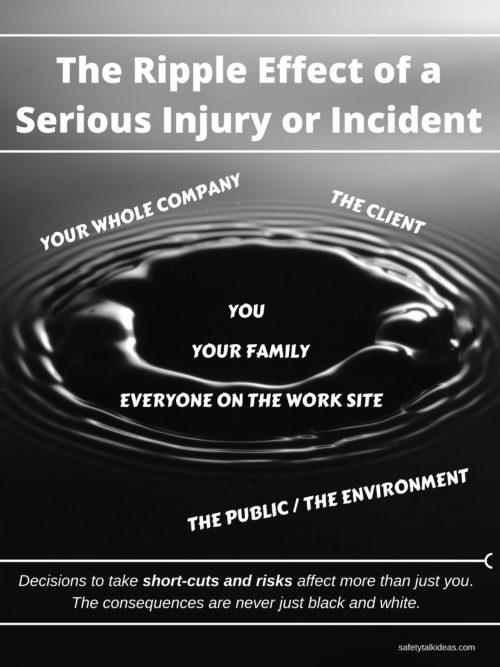