Areas where there are deer, and other large animals live pose an extra hazard when driving. The Insurance Information Institute reports that over 1.6 million deer-vehicle collisions occur each year, and these accidents cause vehicle damage, injuries, and even fatalities at a cost in the neighborhood of $4.6 billion. Many of these accidents occur during the breeding season, also called “the rut.” This season usually lasts from late October to as long as early January in most of the United States, with late October to the end of November being the peak.

During this time, deer are more active and on the move. Outside of direct collisions with deer, other accidents occur due to vehicles swerving to miss a deer. Deer are more likely to be a distraction for drivers during this time as well.

1. Always wear your seatbelt. Seatbelts are proven to save lives in a crash. 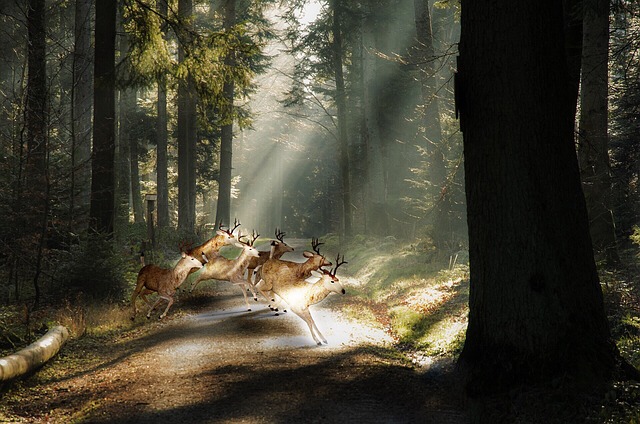 2. Slow down in areas where you know deer are usually present. Deer are often animals of habit and can be found in the same areas at the same time of day. Deer are often found near roadways during the early morning hours and at dusk.

3. Apply your brakes early as possible if a deer is near or on the road. Even if the deer passes the roadway well in front of your vehicle slow down. Deer are herd animals, and where one is found, there is most likely another.

4. Do not swerve to miss striking a deer. An accident involving another motorist or a fixed object will have larger consequences than if you were to hit the deer.

5. Never get out in an attempt to help a wounded deer. If the deer is still alive, you can be injured. Contact the proper authorities to handle the deer, so it is not a hazard to other motorists.

These safe driving principles can also be applied to areas where other animals exist. Animals such as elk and moose pose some of the same hazards as deer do to motorists.

-How many people have been involved in a deer/ vehicle incident here?

-Can these incidents be avoided? If not, what is the best way to limit your chances of hitting a deer?